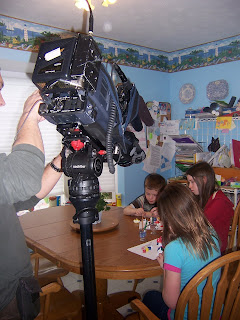 Do you recall I mentioned that our family was interviewed by Kathleen Cairns of FoxBaltimore? Here’s what I wrote about the TV_Interview.
From watching how Kathleen Cairns put my daughter at ease to marvelling at the way the cameraman (Brian) filmed Crafty Daughter play on Yoursphere, I knew that the interview would be a good one. Now I’m not saying that to sound braggy. Not my intention at all. The interview showcased Yoursphere and my daughter. Great combo in my book. My daughter was shown to be articulate and well-spoken, not to mention a good writer.
My daughter truly enjoys playing on Yoursphere. About two weeks before the filming, I was contacted by MaryKay Hoal, founder of Yoursphere and mom of 5, about being interviewed. MaryKay asked me if both girls wanted to be interviewed about their interactive play on Yoursphere. I initially said “Yes” for both girls to be filmed. After pondering, I realized that my 10-year-old has only dabbled on some of the pages. Truthfully she was not that interested. Webkinz and Beacon_Street_Girls were more her idea of fun. My 10-year-old and 6-year-old are shown painting pottery animals in the piece — so both are happy. I made the right decision to let Crafty Daughter be the star of the interview.
I let the 13-year-old and 10-year-old stay up to watch the interview tonight. Our promo was shown during tonight’s American Idol Finale — not bad for our first interview. I wonder how many of our friends watched the Finale and saw us! We watched on TiVo. You can tell the summer is a approaching since I have no grip on rules or proper bedtime for preteen and teen. Tomorrow morning might be fun. Not.

← Free Ice Cream at Friendly’s!
As Sands Through the Hour Glass →