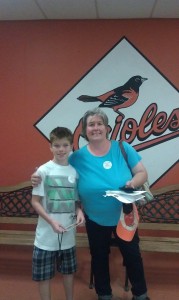 The crack of the bat. The smell of cotton candy. The stifling hot summer night air. The freebie baseball jersey for kids. My first experience at a baseball game was a veritable assault to my senses. EVERYTHING was so new to me. I don’t recall who the Phillies played that night. I don’t remember what we ate…although we probably ate hot dogs and drank soda. But, I do recall in striking detail the conversation we had with a couple in the seats next to us.

My sister and I were visiting my Dad in Philadelphia. He was on business for a few weeks. Most days we hung out at the hotel — I was 15 and my sister 13. In the evenings we explored Philly and the surrounding area with my Dad. That August night we stumbled upon a baseball game that couldn’t have been more foreign to us. Fortunately for us, the couple sitting next to us took time away from the game to give us the low down on baseball. They told us about strikes, innings, bases loaded, and other many and varied baseball terms.

I probably didn’t see another baseball game until I was dating my husband in the late 80s. My husband is an Orioles fan tried and true. He sticks by his O’s through thick and thin. We enjoyed a number of fun Orioles games with my college alumni association, his high school friends, his job, and my job. For a time we even took our two girls to a few games when they were members of the Dugout Club. But over the last few years, if we have caught a game it was probably a minor local league game.

My son had never seen the Orioles until last month. As a person living in Maryland, it’s a pretty sad state of affairs that my 9-year-old had never seen an O’s game. Now he can say that not only did he see an Orioles game, but he did it in style! 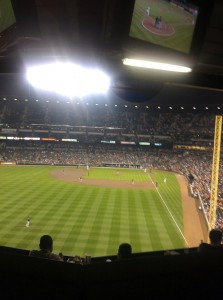 You see a few weeks ago a group of DC Moms were invited to a very special event at Camden Yards. The special occasion was to commemorate the 20th anniversary of the opening of Camden Yards: the home of the Orioles. I must admit that I had no idea Camden Yards had been open so long.

The moms and kids — I brought my 9-year-old son, and 13- and 16-year-old daughters — were treated to a night that would be hard to replicate as we:

We left in the 7th inning stretch. My son was engrossed in the game and would have stayed longer, but his sister had an early morning swim practice the next day so we left. While the moms chatted with each other and learned about the Orioles’ organization, I was interested to see that all the kids were intently watching the game. My kids barely moved, in fact, I brought small plates of food and drinks to them from time to time during our night. I guess they didn’t want to miss anything!

Here’s how to win…it’s super easy. First, leave  the mandatory comment. Second, leave one or more of the optional comments. Remember, you must leave the mandatory comment for the other comments to count. Oh and don’t forget to leave your email address in the comment. so I can contact you if you win!

I was invited to visit Orioles Park at Camden Yards as part of a mom and kid blogger event. I was given tickets to see an Orioles Game. This giveaway is open to U.S. residents only. The giveaway ends September 26, 2012, at 11:59 p.m. EST. The views expressed in this post are my own. I follow the tenets of Blog With Integrity.

10 comments for “Introducing Children to the Nation’s Pastime: #Baltimore Orioles Is for Kids [Giveaway]”