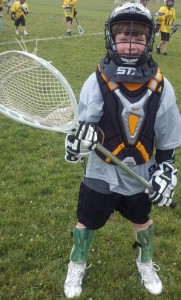 Boys are different. Obvious, right? After having first one and then two girls, I waited a a year or two before getting pregnant again. By the time I was finally pregnant my girls were 4 and 7. Our house was overflowing with every pink toy known to man. Every surface was covered in either a sheen of glitter or a coating of feathers from all those dress up feather boas. For a few months, my infant son played with all the girls’ old baby toys. As he approached the sitting/cruising/walking stage, I began to look for toys for him. I ventured in to aisles in the toy store I had never explored. Not surprisingly my son loved all things with wheels, all blocks, and anything that was a ball.

Ball playing became a key part of our day. Whether we were rolling a small ball back and forth in the house or kicking a soccer ball in the backyard, my son was in love with any game or toy that included a ball. Looking back I see that at his sister’s soccer and t-ball games he was observant and curious. Wanted to see where the ball was going. Insisted on carrying his ball to soccer practice. Demanded that we kick a ball back and forth even though at 18 months he was unsteady on his feet.

Starting when my son was old enough to look at a book and see a ball or a soccer player, my arms were always overflowing wuth books about sports, books about kids playing sports, or even books about how to make a sports ball. Last year, I was placing an order for a school fundraiser. I happened to turn to the magazin ordering page. In no time at all I had decided to subscribe to a couple of magazines, but needed one more magazine to complete my order. I knew that my son would love Sports Illustrated for Kids. He was an 8-year-old who loved reading but didn’t yet have the interest to finish a lengthy book. A magazine would be the perfect way for him to read short articles and learn about the sports he loves. And I was right…he loves SI for Kids!

And for iPad users…SI Kids is providing their September tablet issue COMPLETELY FREE! The tablet edition has everything that the print magazine has, but also includes bonus photos and interactive features like games and sports cards that kids will love!

Simply download the SI Kids app on iPad or Kindle Fire, and use these credentials to access the September issue:

Or you can get a year of SIKids in print AND on tablet for $19.95 by subscribing here.

I received a year subscription, promotional merchandise and information from Sports Illustrated Kids in conjunction with this post. The views expressed in this post are my own. I follow the tenets of Blog With Integrity.