I posted about the new Duran Duran tour and album a few days ago. It got me reminiscing about the 80s.

I had a Duran Duran t-shirt at one time. My last DD t-shirt was purchased in the 80s and sadly even if it fit it would be faded and worn out. It might be stashed in my keepsake box. I keep a Rubbermaid tub of tees for that day when I (a) learn to use a sewing machine and (b) have time to make a quilt of my tees from the 80s, vacations, concerts, and even a couple from the 70s. Until then I have a tub of tees collecting dust! 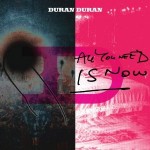 I bought the tee at my first large arena concert. I saw Duran Duran at the Philadelphia Spectrum with my friend, jeff, a fellow English New Waver. I remember how in awe I was of the stage show and pyrotechnics. The stage show would be tame by today’s standards, but in the 80s it was high tech.

Back when DD was hot, I was a sophomore at small liberal arts college in PA. As you can imagine, English New Wave music wasn’t exactly streaming out of the speakers in college dorm rooms. Heavy metal and Grateful Dead were more the music of choice back in 83-87! I had a radio show on the college radio station where I ONLY played English music…my listenership was small, but devoted ;-).

I was a devoted fan back then. I went all out to get my music on the airwaves. I was in the know about music and pop culture in the same way that I am in the know about blogging and brand promotion. Back then, my mother would buy 7″ singles (records) of the groups I loved and send the singles packed between steel baking trays to me at college.

I can only imagine how out-of-place my very English mother must have looked browsing the racks at HMV or Virgin Records for the latest singles. I would “premiere” these new singles from groups like Duran Duran, The Thompson Twins, The Cure, The Smiths, and many other groups on my radio show.

My radio show was titled “Technical Difficulties” for a reason…I once locked myself out of the studio. The record played on and on and on until security arrived with the master key. Remember it was the days of records so skips and scrapes were an integral part of my show. Oh and I once put a PSA in the 8-track-like PSA player only to have the machine eat the PSA. The PSA as played to my listeners sounded like the adults on the Peanuts…Waaa, Waaah, Waaaahhh!

The links in this post are to my amazon affiliate account. To join PopSalad…it’s in beta…click here.

2 comments for “My Days as a Radio DJ @popsalad”