My 5-year-old (aka Adventure Boy) is enamored of all things Star Wars. Two months ago he barely knew Star Wars. His new obsession happened around Halloween. He insisted that he wanted to be Darth Vader. How could he know who Darth Vader was? He had never watched the movies OR read a book. I got my answer one day when he talked about what he did at recess. Apparently two girls and two boys and my son played Star Wars each recess.

This play activity struck me as funny since I wondered how the Nazi-like recess monitors tolerated the light saber wielding kindergartners. These ladies are usually the fun police.

So mini Darth Vader hit the streets in costume wielding light saber and scary mask. He and his kindergarten crew made a fun bunch. There was a Darth Vader, Queen Amidala, Princess Leia, Storm Trooper, and Anakin or perhaps Obi Wan Kenobi. I am not a Star Wars aficionado so who knows.

My son wanted the Millennium Falcon ship. The purchase of this toy was easier said than done. First of all who knew that it retails for $150. Coach Dad immediately said “no” to this purchase. Hmmmpppfff. I wasn’t taking No for an answer. I did some searching. Target did not have it. Toys R Us and WalMart had it for around $150…no discounts to be had. I had almost given up my online search when I clicked on amazon.com 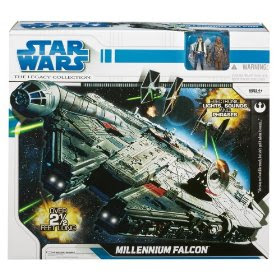 Bingo! I found the Star Wars Millennium Falcon for around $80 (now retails for $134.99!). I doublechecked to make sure I wasn’t buying a tiny version…think, the Stonehenge model in It’s Spinal Tap! All specs checked out and I purchased. Chose Super Saver shipping, which led to an offer of a free month of amazon PRIME. amazon.com Prime is a wonder…where has it been all my life. I am now the proud owner of free shipping for a month. I may have to sign up for more months of Prime.

This post started out with Star Wars and ended with a shipping recommendation, but that is how it is with me. Just a stream of consciousness.