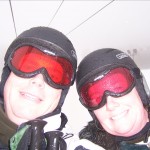 I know, I know we look strange, but at least we were safe on our ski trip!

Found this over at More than a Minivan Mom’s blog…

You can add this to your blog, too! Instructions:

Copy the list, bold the ones you’ve done (with explanations if needed), share with friends.
1. Started your own blog — January 2008, did not write regularly until late 08/early 09
2. Slept under the stars — camped four times
3. Played in a band –does an air band count??
4. Visited Hawaii
5. Watched a meteor shower
6. Given more than you can afford to charity
7. Been to Disneyland
8. Climbed a mountain
9. Held a praying mantis
10. Sang a solo
11. Bungee jumped
12. Visited Paris — visited at age 8, age 15
13. Watched a thunder and lightning storm
14. Taught yourself an art from scratch — does scrapbooking count?
15. Adopted a child
16. Had food poisoning — had to postpone our engagement as Coach Dad and I had food poisoning following eating Pasta Primavera at the Kennedy Center restaurant
17. Walked to the top of the Statue of Liberty
18. Grown your own vegetables
19. Seen the Mona Lisa in France
20. Slept on an overnight train — as a toddler I took the overnight train from Manchester to London.
21. Had a pillow fight
22. Hitch hiked
23. Taken a sick day when you’re not ill
24. Built a snow fort
25. Held a lamb
26. Gone skinny dipping
27. Run a Marathon
28. Ridden in a gondola in Venice — the ride was SO expensive, but I am grateful to my parents for allowing us to experience this amazing ride!
29. Seen a total eclipse
30. Watched a sunrise or sunset
31. Hit a home run
32. Been on a cruise — Hmmm does taking a cruise ship from Portland, Maine, to Yarmouth, Nova Scotia count?? It was a 1-night trip. Very choppy. It was the second day of our honeymoon…we were both seasick.
33. Seen Niagara Falls in person — once as 5-year-old and with kids
34. Visited the birthplace of your ancestors
35. Seen an Amish community (Lancaster County, Pennsylvania — graduated from Franklin & Marshall College)
36. Taught yourself a new language
37. Had enough money to be truly satisfied
38. Seen the Leaning Tower of Pisa in person
39. Gone rock climbing
40. Seen Michelangelo’s David
41. Sung karaoke
42. Seen Old Faithful geyser erupt
43. Bought a stranger a meal at a restaurant
44. Visited Africa
45. Walked on a beach by moonlight
46. Been transported in an ambulance
47. Had your portrait painted
48. Gone deep sea fishing
49. Seen the Sistine Chapel in person
50. Been to the top of the Eiffel Tower in Paris
51. Gone scuba diving or snorkeling
52. Kissed in the rain
53. Played in the mud
54. Gone to a drive-in theater — Saw Goldfinger at age 7?? Perhaps not the most appropriate film. I think I fell asleep before the end of the movie.
55. Been in a movie
56. Visited the Great Wall of China
57. Started a business — Is my blog a business??
58. Taken a martial arts class
59. Visited Russia
60. Served at a soup kitchen
61. Sold Girl Scout Cookies — both as a Girl Scout and many times as a Girl Scout mom.
62. Gone whale watching
63. Got flowers for no reason
64. Donated blood, platelets or plasma — Was able to give blood in the 80s before the Red Cross cracked down on anyone who had lived in England during the 80s due to Mad Cow disease. I am allowed to be a Bone Marrow Donor. I have not donated bone marrow, but was contacted as a potential donor.
65. Gone sky diving
66. Visited a Nazi Concentration Camp
67. Bounced a check
68. Flown in a helicopter
69. Saved a favorite childhood toy — Successfully persuaded my parents to save a box each of Lego, Matchbox/Hot Wheels cars, doll house furniture, dolls, and plastic animals. All the grandchildren love playing with our childhood toys.
70. Visited the Lincoln Memorial
71. Eaten caviar — Hated it. Don;t care for oysters, lobster, or champagne either.
72. Pieced a quilt — Would love to create a quilt out of old t-shirts. I have a box of t-shirts for all 5 of us. Some day?
73. Stood in Times Square
74. Toured the Everglades
75. Been fired from a job
76. Seen the Changing of the Guards in London
77. Broken a bone — hairline fracture of ankle caused when I walked on gravel in a parking lot.
78. Been a passenger on a motorcycle
79. Seen the Grand Canyon in person
80. Published a book
81. Visited the Vatican — Heard Pope John Paul II say Good Friday Mass in 1982. The Pope passed within 10 chairs of our family as he left St. Peter’s. I used this experience as one of my college essays. The other topic was my reaction to the war between Argentina and the U.K. over the Falkland Islands…also in 1982.
82. Bought a brand new car — Mustang LX 1988. Ford Windstar 1999. Toyota Sienna 2006.
83. Walked in Jerusalem — My dad did. I was subjected to a 150-slide show of Jerusalem.
84. Had your picture in the newspaper — Does college newspaper or local news paper count?
85. Kissed a stranger at midnight on New Year’s Eve
86. Visited the White House — Lined up outside in the freezing cold for hours to see the Christmas tree in 1986. Well worth it.
87. Killed and prepared an animal for eating
88. Had chickenpox — Contracted chicken pox as a 15-year-old. Couldn’t wear glasses for 2 weeks as I had a spot on my nose and behind my ear. Hated missing 2 weeks of school!
89. Saved someone’s life — Pulled a piece of pepperoni out of my toddler’s mouth? I thought she was a better chewer than she was.
90. Sat on a jury
91. Met someone famous — Met Jay McInerney Bright Lights, Big City at a book reading/signing. Met John Updike at a book reading/signing.
92. Joined a book club — Joined 2001. Still a member. Huge thanks to my good friend GiGi for creating the group!
93. Got a tattoo
94. Had a baby — 3 babies
95. Seen the Alamo in person
96. Swam in the Great Salt Lake
97. Been involved in a law suit — Does being a member of a class action suit count??
98. Owned a cell phone — First cell phone was a very heavy Motorola. Have broken two cell phones.
99. Been stung by a bee — bottom of my foot.

← Post Written on the Way to #toyfair…Just found…Ooopsie!
Blogging Conferences →