Here’s some facts about the Musings from Me family’s love of recording our travels, adventures, and moments:

But, here is where it gets complicated:

All of these “facts” account for the two boxes of assorted video tapes gathering dust in my office. My desire has been to convert all the various formats of videotapes to DVDs, so that we can watch all of our home movies. At some point in time, my husband copied most of the VHS-C tapes onto VHS tapes. Time passed and those VHS recordings of our family adventures and travels are also gathering dust in a box in my office. It’s a veritable graveyard of home movies that we are unable to watch.

The MANY hours of home movies seemed destined to languish in boxes forever until either my husband or I found a spare moment to convert the various video formats to ONE watchable digital format. Time is a hot commodity in this house. With three kids on the go, a mom who works at home, and a dad who works long hours, time is something we crave. Which is why when I was offered the chance to try out YesVideo’s Videotape to DVD conversion service, I jumped at the chance. I might have jumped for joy, too! 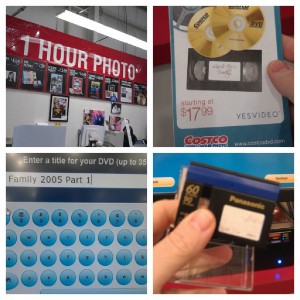 Step-by-step guide to converting videotapes to DVDs: 1. Visit Costco. 2. Find the Photo Department. 3. Use the computer kiosk to order your DVD. 4. Give videotapes (any format) to Photo Booth.

Here’s how the step-by-step YesVideo Videotape to DVD process:

The Videotape to DVD conversion order process was straightforward. In late November, I had to get one of my front tires checked at Costco, so I brought 4 MiniDV tapes to Costco to try out the YesVideo Videotape to DVD processing. As luck would have it, the 4 MiniDVs tapes covered all of 2005.

I planned to separate the four miniDVs in to two Videotape to DVD orders; two MiniDVs per order. At the Costco computer terminal, I placed one order for “2 Tapes to DVD,” since I had two MiniDVs to convert to DVD. I was asked to verify that the total length of both tapes was not greater than 2 hours. I placed a second order for 2 Tapes to DVD with the other two MiniDVs tapes. I was charged $17.99 for each order.

About a week later, I received an email with tracking information for both orders. Two-and-a-half weeks later, I had my husband stop by Costco to pick up the order on his way home from the car dealership where he had his car in for service. See what I mean about time…both of us do errands on the same day to save time. Even though I placed both orders on the same day, one order arrived a day before the other, but since I had the tracking information I knew which day to go to Costco to pick up the DVDs.

We watched the home movie DVDs the other night on the family desktop. I had planned to wait for family movie night to “screen” the DVD, but I couldn’t stop myself from taking a peek. The kids heard all the squeaky baby voices and me oooohhing and aaaahhing over what I saw in the computer monitor, and had to watch, too. Soon all 5 of us were crowded round the desktop watching the cutest scenes from 2005:

I could go on and on about the sweet, and sometimes forgotten memories on that DVD. I had forgotten how many words my toddler had. I heard him say…very clearly for a not-quite-two-year-old…”frog,” “bear,” and “monkey.” Amazing memories. Those videotapes would still be in the box gathering dust, but instead we are able to marvel at how much the kids have grown over the years.

I plan to play these DVDs on Christmas Day for my parents. We’ll call it the Musings from Me movie screening of “Family Adventures 2005”!

To find out more about YesVideo:

I was given a gift card to facilitate my review, and was compensated for this post. The views expressed in the post are my own. Affiliate links are to my amazon account. I follow the tenets of Blog With Integrity.