I’m always on the lookout for something to do, somewhere to go, something to watch, something to read. Family time is a huge deal for me. I crave it. I know my kids and husband need the time at home to regroup. After a busy fall of two on the swim team and one on the Varsity Volleyball team, we’re a tad tired. Swimming is a year-round thing for our two kids. Our volleyball player who played in the fall, resumes playing in December after a brief hiatus.

Knowing that we had a short break before our insane schedule gets back in to gear, I have been in overdrive trying to schedule stuff for us to do. We caught a screening of the #Muppets movie. We wrote postcards to the troops. We considered going Black Friday shopping, but didn’t. Of course we celebrated Thanksgiving with family. We shopped — not exactly until we dropped, but at least we ventured to Target and the Mall — as a family for Christmas gifts and ideas for Christmas lists for Santa. And we had a fun game night!

I brought out a fun game for us to play…a game that really takes up no space at all. We played UNO Roboto. Are you an UNO player? I know that my kids play UNO at recess. Usually the card game, but sometimes they play UNO Attack. My son has UNO Attack on his Christmas list to Santa. Though I never played UNO growing up in England, I appreciate a game with staying power.

After a recent binge and purge of stuff in our family room, we used the extra space on the coffee table for cold drinks and ice cream! The kids love ice cream as much if not more than cake. I’m a chocaholic to the nth degree, so if I am buying ice cream there are no guesses as to what I am buying! In order to get a little variety going, I let my oldest choose a couple of yummy sounding Coldstone Creamery flavors — Cake Batter Batter Batter and Shock-a-Cone. And yummy there were. We slurped those ice creams down lickety split. 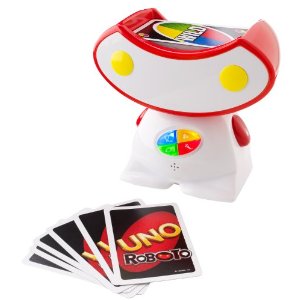 The game — UNO Roboto — is a blend of the traditional UNO card game and an interactive game. Before you play, each player records his/her name on the UNO Roboto device — a cute, compact, little guy with a space on top of his head to store cards.

After the names are recorded, one player records a Special House Rule. Examples of Special House Rules are listed on the a few of the UNO cards. The object of UNO as always is to get rid of your cards as quick as possible. As you play the UNO Roboto will instruct players by name to do tasks. A nice twist to a traditional game. Adding to the “fun” for mom, dad, or the grandparents is that UNO Roboto comes with 3 batteries. You can literally buy the game at the store and play the game in the car coming home!

Considering purchasing a game this holiday? You might want to know that you can get a FREE 7″ x 9″ Shutterfly Photo Book (a $15.99 value) when you buy one of the following games at Toys R Us:

I wrote this review while participating in a campaign by Mom Central Consulting on behalf of UNO Roboto and received a product sample to facilitate my review and a promotional item to thank me for taking the time to participate.

← Making the Best of It
Winners! I Love Announcing Winners! →

1 comment for “Holiday Gift Guide: A New Twist on an Old Game”