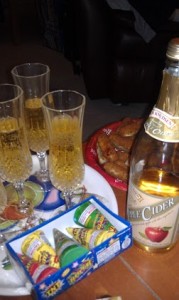 My children are not old enough to have plans of their own. Our NYE started with a leisurely morning for most of us and an early morning for the youngest child. I would feel for him being in the house on his lonesome while the rest of us snooze away on the next floor, but he loves having the house to himself. When the kids were 5 and under we always got up with them. My husband and I would trade off…truthfully @DadKnowsBetter did the lion’s share of early mornings. I sleep like a log and I guess the kids had more luck waking up dad. Now that all are old enough to be in the house alone, we get to sleep in.

Once up…well it took a bit to get one of the girls up and at ’em…we planned our day. Several items were on the agenda…I needed an office chair…after 16-plus years of sitting on a folding card table chair….yes it is as uncomfy as it sounds…I am finally ready to bite the bullet and buy a new office chair. So it was off to our local big box stores to test out chairs. Before hitting Office Depot we popped in to next door neighbor Best Buy, to return a couple of iPad screen protectors that were not needed as the kids got Otterboxes for their iPads. (Yes, my kids are the luckiest kids in the world…they are the only grandchildren on one side of the family and are quite spoiled!) With the money from the screen protectors, the younger daughter bought a shocking pink PS3 controller…very cute. The son got Little Big Planet 2…that game is really odd…but funny…the narration/voice over on the game is none other than my favorite British actor, Stephen Fry. In fact, my movie to work by is none other than Peter’s Friends where Peter is none other than Stephen Fry!

The kids had to be cajoled…dragged to Office Depot…come to think of it Dad Knows Better wasn’t exactly thrilled to go office supply shopping, but it was the last day of 2012 and I wanted to stock up on stuff as writeoffs. Here’s what I bought…

After finally tossing scads and scads of paper from my last office job. You might be wondering why I kept boxes of paper for 16-plus years. You see I was an editor for a health care publisher for years before kids and about 6 years post kids. Those books, journals, manuals, and newsletters were my “babies” before I had babies. I pored over those manuscripts with a fine tooth comb. Once published, it was hard to let go, so I kept a copy of the book, or the galley proofs, and even some of the stress-inducing schedules. But, it was time to get rid of the papers. I now have 10 garbage bags of paper and cardboard out for recycling pickup…feels so good.

But, back to the cardboard storage boxes, I need a few to store my blogging paperwork. Even though I am technically paperless, I keep receipts, flyers, and anything to do with reviews or trips or blogging conferences for tax purposes. I even keep a detailed google document for all my reviews, giveaways, sponsored posts, blogging trips, and conferences. Having a document with details about project helps so much at tax time. Although, my husband wishes that I would get him the doc and all related receipts sooner rather than later in 2013. Here’s to getting everything done by the end of January.\

And before I ramble I have winners!

Stay tuned for more winners and more giveaways, and of course my favorite posts…tips for being a not-so-perfect parent.

← Why I Made My Blog a Priority
Wordless Wednesday: NYE Photobombing →