Disclosure: I was sent the BluRay to facilitate my review. This post contains affiliate links. The views expressed in the post are my own. 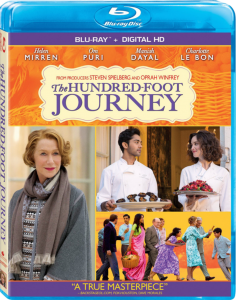 Now don’t go thinking that we are a couch potato family. Far from it. We play hard at school, college, work, and at sports games, but when we have down time we love nothing more than family movie nights with all of us gathered together to watch a movie with our favorite drinks and snacks.

Our Indian-themed movie weekend wasn’t planned at all. I received a package with The Hundred-Foot Journey Bluray on the same day that I received the Million Dollar Arm DVD from Netflix. With two new movies, there was no other choice but a Double Header Family Movie Night! On Double Header  Family Movie Nights, the kids choose Movie #1 and then once they go to bed, we settle in for Movie #2. The kids loved Million Dollar Arm. So did we. The movie had a great storyline. Once the kids were settled up in bed, we hunkered down to watch The Hundred-Foot Journey.

I was excited to watch this as Helen Mirren is one of my favorite actresses. She’s best known for The Queen, and for her superb turn as Detective Sergeant Jane Tennyson in the Prime Suspect TV series, but she was also in Gosford Park, Elizabeth I, and Hitchcock. The name Om Puri was very familiar. I thought of all the Indian movies I have seen and knew that Puri was in a couple of them, but I couldn’t remember which ones. So I searched IMDB. A long with appearing in many, many Bollywood movies, Puri has starred in more mainstream movies, City of Joy, Ghandi, and The Zookepper; and  The Jewel in the Crown, a British TV mini series.

I knew almost nothing about The Hundred-Foot Journey. I knew I would love the cast. Who wouldn’t love Helen Mirren, right? I needn’t have worried, The Hundred-Foot Journey was very good. The movie is produced by Stephen Spielberg, Oprah Winfrey, and Juliet Black and directed by Lasse Hallstrom. Hassan Kadam (Manish Dayal) is an untrained cook in his parent’s restaurant. After his mother is killed in a fire, Hassan and his family are forced to move out of India, first to England, and then to France. The cold, rainy British weather is unbearable to them after India. They hope the south of France’s climate will suit them better.

The Kadam family opens Maison Mumbai in a tiny village in the south of France very like the ones where I stayed as a child. I lived in England at a time when most of friends vacationed at beach resorts in England or in Spain. My family preferred staying in France so that we could combine sightseeing with a beach trip. The Kadam family’s quest for a successful restaurant must withstand the shenanigans of the redoubtable Mme. Mallory, the owner of a Michelin starred restaurant, which happens to be across the street from Maison Mumbai. In spite of Mme. Mallory, Hassan Kadan will not be stopped from cooking with passion. Mme. Mallory is not about to welcome a new restaurant so close to her.

What You Need To Know About The Hundred-Foot Journey

← Gift Guide: Dress Up Your Sports Bag or Your Hair with Pomchies
Win a Sony PS4! #Giveaway #SonySavings →