I always say I won’t click on another BuzzFeed link. Nope! I do not have time to waste. I have things to do. Places to visit. People to see. But then… I see a headline like: The 23 Greatest Things That British People Love To Eat. How in the world am I supposed to ignore this? I. Can’t. I. Must. Click. It is the British way. I’m powerless against anything posted online about my home country. BuzzFeed you win.

Once I click on a link about British food, the drooling begins. All I can think about is British food. Now, I know what you are saying. You’ve heard that British food is not so good. You are probably wondering why I would miss it. But here’s the thing…British food is hearty, stodgy, tasty, and more or less not healthy for you. Oh, you can order a salad, but why would you when you can sink your choppers in to a Cornish pasty?

Almost 5 years ago, I took my family to England. Though I was born in England and lived there off and on until I was 18, America is now my home. Aside from a couple of trips back to the U.K. in the 90s, I haven’t traveled to my home country in years. I lost my last grandparent when I was 15. I have a few aunts, uncles, cousins, and now second cousins, but my parents and sister live in the United States. I jumped at the chance to take my family to England.

While my kids and husband experienced England’s sights and sounds, I ate my way through all the yummy food from my childhood…chips…cheese-and-onion pie…Cornish pasty…Rowntree’s fruit pastilles…99er ice cream cone…Marks and Spencer’s packaged sandwiches…Walker’s crisps…Shandy…afternoon tea…full English cooked breakfast with real English sausages and bacon, grilled tomatoes, and mushrooms…Ribena…Vimto…and the list goes on and on. 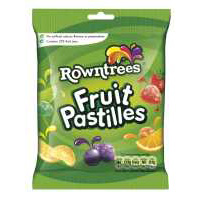 A British sweetie from my childhood: Rowntree’s Fruit Pastilles

Our vacation was glorious. The kids got to see where Mommy used to live, Manchester. The husband got to show the kids, London and Stratford. And I got to eat my way around England! Let’s see if I can remember all my pitstops for food:

← Stay Safe on the Road with Zubie
Enter the @ShopYourWay #Sweeps To Win an HDTV! #ad →