Sponsored: I was given hotel accommodations, ground transportation, and meals from Caesars, Harrah’s, DJais, and D6 Surf Skimmer as compensation for writing about my trip to the Jersey Shore. I paid for my own conference ticket and travel expenses to the event. 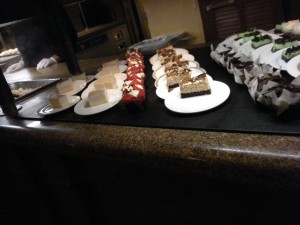 Dessert time at the Boardwalk Buffet at Caesars Atlantic City

What’s that expression? You know the one about getting someone to do something for you using food. Food…mmmm. What was I asking? Oh now I remember what the phrase is. “The way to a man’s heart is through his stomach.” Mmmm…food.

A couple of weekends ago, the Musings from Me family traveled to Atlantic City for the weekend. It was part business…I was part of the Social Media Moms and New Jersey Digital Moms group who met at Caesar’s in Atlantic City to learn what the Jersey Shore has to offer visitors…part social good…I was part of the Social Moms for Social Good who gave back to those who were displaced in SuperStorm Sandy…and part pleasure…my husband, kids, and I were in desperate need of a vacation from the craziness of the school year. 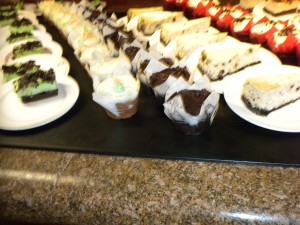 More desserts…can you ever have too many desserts?!

Upon arriving at Caesar’s I was stunned by the sheer size of everything. From the circular driveway leading at the entrance to the hotel to the massive statue of Caesar Augustus, everything in Caesar’s is massive…including the food. While I was meeting with my Social Moms for Social Good group, my husband and kids ate their way through Caesar’s! I did my share of eating too! 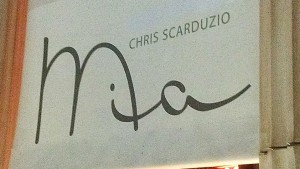 When I told my husband I was writing a post about food, he gave me a bit of history about Caesar that he wanted me to share with you. He’s an English teacher who peppers his lessons with historical facts and anecdotes to keep his students engaged. Julius Caesar got his people to do what he wanted through their stomachs. The Latin phrase — Panem et Circenses — means literally Bread and Circuses. Caesar’s critics have stated that he bought his people’s votes in exchange for providing them with entertainment and food. His people gave up democracy in exchange for food and entertainment. 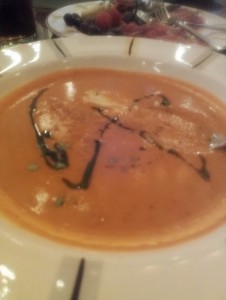 One thing is for sure, the food at Caesars would get me to do ANYTHING! My eating experience began on Thursday evening at Mia’s — @MiaAtlanticCity. While I joined the Social Moms for Social Good bloggers for the opening dinner, my husband and kids walked the Boardwalk in search of pizza. I felt a smidge guilty about eating a fancy dinner without them, but not for long! The food was absolutely spectacular. In the photo above, you can see I had tomato soup after sharing a plate of Antipasto Misto: The
Chef’s Daily Selection of Cured Italian Meats, Grilled and Marinated Vegetables, Olives and Cheese. I could have eaten that entire plate of antipasto, but knew I needed to save room for the appetizer, entree, and dessert. I sampled a little bit of everything…mmmm…so good! 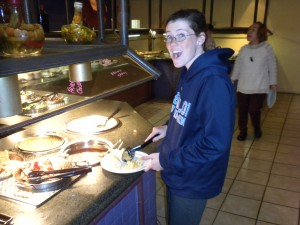 On the second night of our visit, I visited Harrah’s — @harrahsresort — for the Taste of AC event. While I was at Harrah’s, my husband and kids attacked the Boardwalk Buffet. I knew my teen would find plenty to eat, but wasn’t sure if my youngest would be able to find enough to eat. According to my husband I needn’t have worried…my son found PLENTY to eat. I guess you can reach a boy through his stomach too! They sampled salads, soups, the carvery station, a made-to-order pasta station that was a HIT with my husband. He was talking for days about the Blush sauce he asked them to make him…pasta sauce and Alfredo sauce mixed up with pasta. Mmmmm. 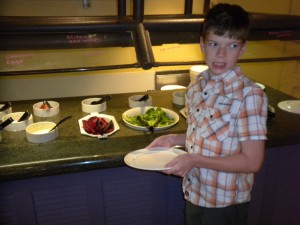 Now let’s see…what should I eat next?

With the family happily snarfing down food at the Boardwalk Buffet, I was ferried by party bus to Harrah’s for a Taste of AC night. And what a night it was! Harrah’s is bigger than Caesars…more shops, larger casino floor. Just busier. Our tour guide escorted us to The Pool, a new nightclub that features what else but a large swimming pool. Everything shimmered with the blueness of the water. I felt transported to a tropical island with a private lagoon or marina. The food was marvelous…Ceviche, a Plantain Empanada, a Steak Dish, and lots of desserts. One dessert in particular was a popcorn mousse with crushed bacon…I can assure you that I was skeptical about it but it was SO GOOD. All the food items were served in one or two bite portions. An Amuse Bouche if you will. The appetizers were amazing and I probably should have stopped eating earlier than I did. But the portions were so small and everything was SO delicious. As I said before, I would DO anything for food…especially good food! 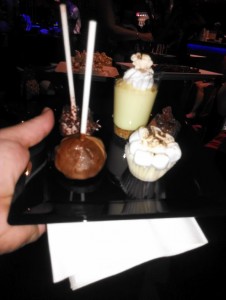 On Saturday, my family took an excursion to the Absecon Lighthouse — @AbseconLight — in Atlantic City, while others in the group explored the Steel Pier — @steelpierac — or the Wine Room at Caesars with a #ATimeForWine. I didn’t join the group on Saturday night for the Ladies Night Out at The Pool After Dark at Harrah’s Resort @PoolAfterDark as my knee was killing me…ugh…but I knew I needed to rest up. So I did the next best hing…I took the family out to dinner!

Saturday night dinner at Cafe Roma was just deliciousness personified. All of us wanted to only order the various French fry dishes that were the featured item that month, but we compromised by ordering sandwiches and salads AND two of the French fry dishes. Mmmmm. I don’t remember the exact names of the dishes, but one was Four Cheese French fries and the other was Nacho French fries. So good! 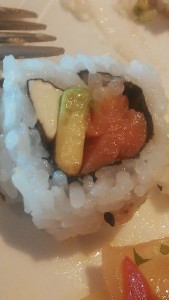 Sadly all good things have to come to an end, but not before the kids and husband hit the Breakfast Buffet and I joined the Social Mom for Social Good group at Nero’s for Sunday Brunch. I would highly recommend that you check out Atlantic City, Caesars. Harrah’s, and other places on the Jersey Shore…you won’t be disappointed! Also, coming up is the Atlantic City Food and Wine Festival on July 25-28, 2013.