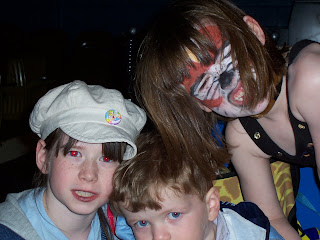 Crafty Daughter in her “hat phase,” Adventure Boy in his “squirming to get out of the photo” phase, and Sporty daughter as a Cat (I don’t recall which one) from Cats.

My three children were born to the same parents, live in the same house, eat the same food, but were born in different decades. Now why would I mention decades in relation to food? Well, my daughters were born in the 90s, while my son was born in 2003. My daughters are picky eaters, while their brother will eat anything.

My daughters were 90s babies, arriving in 1996 and 1998. Those years were all about surviving. Cooking and preparing meals at home was sometimes not an option with our crazy schedule. I was a WAHM with a newborn and a toddler. I worked only when my little ones slept. Consequently I worked mostly in the evenings and on weekends. My husband was an English teacher who when he wasn’t grading papers worked as a part-time high volleyball coach and graduate student. Busy.

We were exhausted, burning the candle at both ends, using toothpicks to prop open our eyes, medicating with caffeine. Whatever the saying, our lives were chaotic and unscheduled. The only schedule we adhered to was our daughter’s naptime. That blissful 2- to 3-hour period was heaven with a cherry on top. Now of course we worked during naptime: I edited manuscripts while he worked towards his PhD dissertation.

Because our schedules were chaotic we cooked in very little. Many evenings we would drive to drop off my editing assignments or a FedEx package that needed to go out that night or else. Dinner became fast food or a restaurant. Our children became pros at ordering. One of my youngest daughter’s first words was “chip” as in tortilla chip. I recall my older daughter chiming up from the back of the van that she would like a “decaff frap vanilla” as we sat in the drivethrough lane at Starbucks. Sad, but true.

Now when my son was born in the early 2000s, we were at home more for dinner and other meals. I actually learned how to cook. By that time I was a SAHM to two early elementary school students and one baby boy. My life was a million miles away from the 1990s. I stopped freelance editing shortly before my son was born. My husband’s PhD afforded him the opportunity to find a better paying job.

While the girls were in elementary school, my son and I spent all our time together. I realized that when I would eat something like a salad that he would want to try what I was eating. I was amazed that he would eat whatever I put on his high chair tray. My son eats fruits, vegetables, Chinese food, ribs; basically anything we put in front of him he will eat. His sisters are still quite finicky and picky eaters.

I wish that I could have stayed home with all three of my children, but our circumstances were such that I had to work. All I can do is to continue present my daughters with food so that they can catch up to their brother’s repertoire of food likes. Cue eye-rolling and attitude.

← Skiing Through the Years
Trash, We Don’t Need No Stinking Trash! →