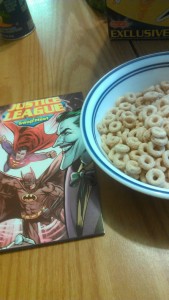 My childhood was nomadic. No, really. I am not exaggerating when I say that I moved around a lot. I lived in England, America, and Italy. A few years in each country. We were continually moving back and forth across the Atlantic.

I became, and still am, VERY adaptable. Moving from place to place will do that to you. One of the things I had to get used to when we moved from country to country was the food. My mother gave up trying to find food in England that was what we were used to eating in America. And she didn’t even consider finding English or American food in Italy. So when in Rome…or in our case when in Milan, we ate like Italians.

One food can be found in practically every country in the world. What is that food? Cereal. When I was a kid in England, cereal choices were limited. I either ate Farley’s Rusks with hot milk (it was actually a baby cereal that I ate WELL in to my teens. Shhhh!) or Wheat-a-Bix or Shredded Wheat. Now, Wheat-a-Bix was as close to eating soggy cardboard  as you could get without actually eating soggy cardboard. I would pour hot milk on top of the Wheat-a-Box and pile on the sugar to make the whole thing taste like sugary soggy cardboard.

In Italy, breakfast cereal options were mostly oatmeal and a type of porridge. Even adding sugar couldn’t disguise the bland taste. Not so ANY of the cereals I at in America. When we lived in America, my mother had no difficulty finding cereals we liked. The more sugary the better. I lived on Cocoa Puffs, Cocoa Pebbles, Fruit Loops, and Fruity Pebbles. Mmmmm…I can almost taste that delicious last spoonful of chocolatey milk. Wait, what was I talking about? Oh, that’s right cereals…

After living in England for middle school and high school, I traveled to America for college. I was on my own, living in a dorm, and thoroughly enjoying the “American College Experience.” Finding food was never an issue. America is truly the land of plenty.  The dining halls offered more choices than I could ever want. And the portions were huge. I was spoiled for choice. When my parents visited campus, I took them to the dining halls for a meal. My mother remarked on the 7 cereal dispensers on a table in one of the dining halls. She had never seen so many cereals. You put your bowl under the chute, turned the wheel, and hey presto…you had a quick and easy breakfast. I ate cereals in college that I had never eaten before. I tried raisin bran and liked it. I tried granola and was meh about it. I tried Cheerios and absolutely loved them. Cheerios is still my favorite cereal of all time. 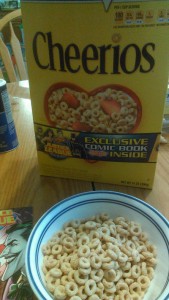 Last month, I was sent a special edition box of Cheerios as part of a program I am a member of. Platefull Coop wanted to know what the Musings from Me family thought of the Justice League Cheerios. Verdict? They loved the Cheerios. No surprises there. But my youngest was surprised by the special part of the “special edition Cheerios.” Each box contains a Justice League comic book. And as a bonus  the back of the box has Justice League masks. Our box had Batman and the Green Lantern masks for kids to cut out.

Breakfasting with super heroes? My son was all over that! He ate the cereal. Perused the comic. And read the box. Do your kids read the box? I love how kids’ cereals always have games or activities on the cereal box. They eat the cereal in the box…then play with the box! It’s a win!

Disclosure: I was sent a box of cereal to facilitate my review. The views expressed in this post are my own.