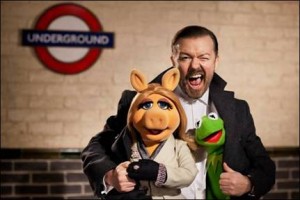 Finding a family friendly film can be a bit of a challenge. Cartoon movies are deemed too young for one of my children. Live action movies about volleyball playing dogs don’t appeal to the non furry loving family members, but are much beloved by two children. And then there are the films that are one small step up from TV shows. You know those movies that are about a family going through some sort of strife where the family members are played by actors who are vaguely familiar but not mega stars and of course but all is well in the end. Two of my kids would happily watch this, while I would rather stick bamboo shoots in to my nail beds. My husband is also not a fan of the “made-for-TV” family movies. So what do we have left to watch on our family movie nights?

That’s right…when in doubt pop in a Muppet Movie and all family members are instantly quiet because who does not love Kermit and Piggy and Rowlf the Dog (I think that is the correct spelling…or is it Rolf?)? And then there is Animal and the rest of his crazy rock band. And what about all those monsters who appear from time to time? Oh and Fozzie Bear and his lame jokes. We all need a Fozzie Bear comedy break, don’t we?

So it is with great pleasure and even greater excitement that I can finally announce the new Muppet Movie!!!

Here’s the 411 on this movie...do people still use this expression to give you the inside scoop? My children say that no one uses “411” anymore…is that because kids don’t use phones and therefore don’t need to call 411 to find a phone number? Anyone remember the Yellow Pages?! Am I the only one feeling old right about now? Crickets chirping…

Released by Disney The Muppets …Again! takes the Muppets gang on a global tour with stops at theaters in some of Europe’s most exciting destinations — Berlin, Madrid and London. But of course it wouldn’t be smooth sailing for the Muppets, nope there’s always mayhem when the Muppets go on an adventure. The Muppets overseas find themselves unwittingly entangled in an international crime caper headed by Constantine—the World’s Number One Criminal and a dead ringer for Kermit—and his dastardly sidekick Dominic, aka Number Two, portrayed by Ricky Gervais. Oh no! Tina Fey rounds out the cast as Nadya, a feisty prison guard, and with Ty Burrell playing the part of Interpol agent Jean Pierre Napoleon.

Want to learn more about The Muppets…Again!

I was not compensated for this post. I’m a lover of all things Disney and love to share!

← Musings from Me Video Book Review: Captain Underpants and the Revolting Revenge of the Radioactive Robo-Boxers #CaptainUnderpants
Remembering #WhyMommy →