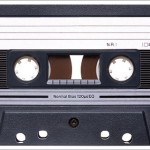 I’m not nearly old enough to remember 8-tracks…despite what my husband might say. My parents never owned a car with a built-in tapedeck and radio until well in to the 80s. My sister and I received a Record Player for Christmas one year…and it was just that…a device that played records with two speakers. No built-in tape deck. I recall that the only way I could record on to a cassette tape was to dangle a microphone attached to a tape recorder over the spinning record. So, I would have a recording of the music AND all the ambient noise in my house plus my heavy breathing.

I saw a CD for the first time when I was DJ-ing in college. I didn’t have any CDs…did anyone?! I was not technically savvy bask then…still not very savvy now…so I rarely used CDs until the 90s. Slowly but surely, I stopped listening to LPs, EPs, singles, and even cassette tapes. I’m a bit of a packrat. You won’t be surprised to learn that I have ALL my record albums in a milk crate and every mix tape I made or someone made for me. I know the needles from both turntables — mine and my husband’s — are broken. Do I even have a working cassette player?

So, I have a treat for you today, lucky readers! Over the past few months, I have received various CDs. For one reason or another none are opened, so I’m going to do a giveaway of a prizepacks of CDs and one DVD for one lucky reader! I’m posting this one today — Tangled CD, Tangled Silly Bands, Emily Osment All the Right Wrongs CD, The Big C soundtrack, and The Cake Boss Season 2 DVD. I’ll post another giveaway next week. Stay tuned!

Winning is easy. First, leave a mandatory comment. Second, leave one or more of the optional comments. Remember, you must leave the mandatory comment for the other comments to count. Oh and don’t forget to leave your email address in the comment. so I can contact you if you win!

I was sent these CDs and DVD. This giveaway is open to U.S. residents only. The giveaway ends April 27, 2012, at 11:59 p.m. EST. The views expressed in this post are my own. Links are to my amazon affiliate account. I follow the tenets of Blog With Integrity.

5 comments for “Does Anyone Still Listen to CDs? [Giveaway]”