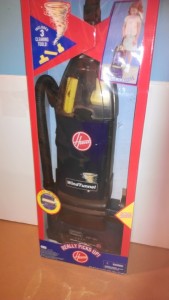 I wish I had jumped on the chores bandwagon when the children were small. The earlier you start assigning chores to your children the better, right? My little ones always wanted to help me clean or fold laundry…even if I didn’t actually want the help. At times their “help” meant far more work for me as cleaning the floor with a little one wielding a tiny broom meant that I had to manage the larger broom while helping the little one sweep with her broom. Chores with little kids means the chore takes twice as long or more.

My youngest was the most enthusiastic cleaning helper. He inherited the Little Tykes vacuum from his older sisters, but soon demanded a “vacuum like Mommy’s.” He got a Hoover kid’s vacuum, which turned out to be his favorite gift from Santa the year he was 2. He loved that the vacuum had a light at the base and that it actually picked up dust and other dirt. He wore through several sets of batteries. Sometimes he would hear me rev up the vacuum and run to get his own. His older sister was terrified of my vacuum at the same age. But soon his enthusiasm for chores wore off. I wish I had started all three children on chores early.

By the time I started chores, I had two tweens and a little kid. To say that these three were not enthusiastic about chores would have been an understatement. My chore charts and incentives fell on deaf ears. I plodded on for months with my disgruntled band of helpers. Finally, I had a sit down with the kids. I told them that I needed their help. Since I was back at work more or less part time, I needed help keeping up with the household chores. We all had to pitch in to keep the house clean and at least somewhat tidy.

5 Tips To Get Kids Involved with Chores