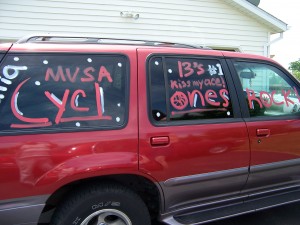 Over Memorial Weekend we made our now annual trip to Penn State. For the previous two years, my husband drove our oldest to play at the 3-day tournament while I stayed home with the younger two. So technically this was my first tournament — as well as the first for my son and middle daughter. This year my middle daughter played at the tournament with her team.

The tournament — Happy Volley at Penn State University — is huge. Over 70 teams of girls aged 12 and under through 18. Every available gym, multipurpose room was used as a volleyball court. Even the ice rink. Funny watching a volleyball game behind plexiglass…no fights broke out I am pleased to tell you. 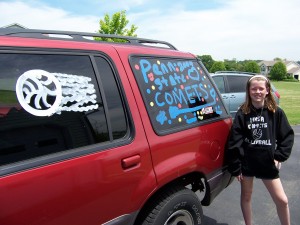 The trip was a little hard for the little guy. He and I purposefully only stayed Saturday through Monday, while Coach Dad stayed Friday through Monday. Losing the Friday made the trip more manageable for my son.

He got to go to a birthday party on Saturday before we got on the road. Dinner was on the road — Wendy’s — and pool time back at the hotel. Coach Dad dropped by to say good night.

Sunday was a little grueling. After a wonderful breakfast chat with a couple who were at the hotel for a bridal shower we trekked to campus to watch the girls’ games — which were of course in separate locations — naturally.

Drove back to dining hall — the Penn State campus is massive with bus service from one end of campus to the other. Lunch was delicious. Bonus #1:   both teams were there.  Bonus #2: Penn State makes the most delicious ice cream.

Down moment for Crafty Daughter’s team: One of her teammates fell and sprained her ankle badly. The girls rallied and finished the game even though they were worried about their friend. The girl was upset, but in very good spirits when we met up later for the team dinner.

Sunday night — Coach Dad showed us his dormroom. Unlike the girls he did not have to share. He was lonesome so moved back in to our hotel room. I had a predinner nap. Son and dad went for a dip followed by dinner with Sporty Daughter’s team. I was thankfully solo as I headed to the busy-whatever-the-location-of-the-Olive-Garden.

Monday–I’ll save the ride home for a another post!

2 comments for “If It’s Saturday It Must Be Volleyball!”