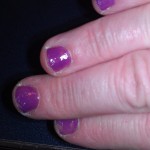 I only knew Susan from her blog. By that I mean I didn’t meet her before I started writing my own blog. But, Susan was among the first group of local bloggers that I met.

We have a vibrant and very supportive group here in D.C. Second to none. But, to say that Susan was “just a blogger” would be missing the point. Susan was much more than that…she was a mom, scientist, researcher, public speaker, nurturer of budding female scientists, and a cancer warrior.

I met Susan one spring morning at a local Italian ice cafe in Rockville. A group of DC bloggers had tweeted about a tweetup meeting. Not one to miss a gathering, I set off armed with Mapquest and GPS to put faces to the names of people I had only “spoken to” on Twitter and Facebook.

After several missed turnings and u-turns, I was late…as usual. Disheveled and irritated with myself for not checking the map ahead of time, I approached a large group already seated at a large outdoor table. I was greeted warmly by one and all.

While I didn’t talk to Susan (@WhyMommy) that day, I had the pleasure of chatting to her at many gatherings through Momzshare, the DC Moms, and conferences. What struck me about Susan was her ability to engage with whomever she was speaking. Susan hung on to your every word even if what you were saying was quite mundane and ordinary. I’m sure I rambled on about something or another (my kids, my oft-forgotten blog, my taxi-driving life) while talking to Susan, but she always listened intently. And that is how I will always remember Susan…for her generosity.

It’s a cliche, but Susan did light up a room when she entered it. I will never forget what Susan told the audience on receiving the 2011 Bloganthropy Award. She said that she was accepting the award not for herself, but on behalf of her cancer warrior friends, some of whom had lost their cancer battles.

You see Susan was a cancer survivor. It was through Susan that I first learned in-depth about inflammatory breast cancer. I hate cancer and I hate that we lost one of the good ones when Susan passed away on February 6, 2012.

If you want to honor Susan, please consider supporting an organization she felt strongly about…the Inflammatory Breast Cancer Research Foundation. Or in the words of Susan’s husband (WhyDaddy) “make a difference somewhere, anywhere, to anyone.”

By the way, if you are wondering about the photo. A group of us painted our nails purple in support of Susan in early February. My preteen-now-teen did a great job with my mani/pedi. She even gave me purple toenails! I regret not having a photo taken with Susan. I tend not to take photos at blogging events and conferences.

2 comments for “Remembering a Friend”