Editor’s Note: Guess what? I will be an honorary hostess of tonight’s Real Housewives of New York City Premiere Twitter Party!! I will be helping the hosts: @coupondiva and @whosthatgirl44 Tune in to twitter at 11 p.m. EST to tweet while you watch the show on Bravo. Hashtag: #RHTM Tweetgrid: http://is.gd/9fTKA

What are you doing Thursday? Do you have plans for Thursday night at 11 p.m.? Scratch them! Why? The Real Housewives of New York City are back, that’s why! 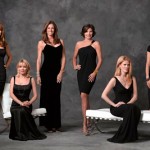 Apologies to Jill and Bethenny who are cut off in this photo!

What’s not to love about all the Real Housewives shows?

From the OC ladies, I jumped in to real Housewives of NYC. Now, the NYC are classier than the OC ladies, right? RHNYC has a countess, a highly mobile socialite (Jill), a young married metrosexual couple (Alex and Simon), and a small business owner (Ramona). These ladies may attend star studded galas and be written up in the New York social register and the dailies, but really underneath the botox, the white teeth, and the money, the RHNYC ladies are out to get each other in a nice way of course. What is not to like about Jill’s over-the-top apartment makeover with numerous footstools and wall hangings? Who wouldn’t feel slighted to attend a party at someone’s house where the host ever shows up?

The New Jersey Housewives are a family. 3 or 4 of the housewives are related by marriage. Who does not love a family drama? There is in-fighting, tantrums, table tipping, and accusations. The reunion show was not so much a show as a cage match held in check by Andy Cohen. Andy Cohen is the host who can controls these ladies!

On to Atlanta. I love the Atlanta ladies. Sheree is the fashionista. Although I did feel sorry for her when Dwight, the “honorary” housewife, proclaimed Sheree’s collection unique and tacky. Ouch. Ne Ne is on twitter — gotta love a twitterite. Jill (@JillZarin) is on twitter, too! I like the way sports and fitness are incorporated in to the show. Ne Ne and Sheree went running. Lisa is married to an NFL player.

In a paragraph all by herself — as she should be — is Kim. Kim Zolciak is a uniquely ambitious Housewife who has a secretive relationship with Big Papa. Is this the season when we will find out who Big Papa is? My money is on an owner of one of the sports teams. And then there is the wig. My goodness! Or should I say WIGS!

← Can a #nontechie Handle a Verizon Palm Pre Plus?
Prunes! Yes, Prunes Were a Hit! →

1 comment for “The Real Housewives of New York Are Baaccckk!”