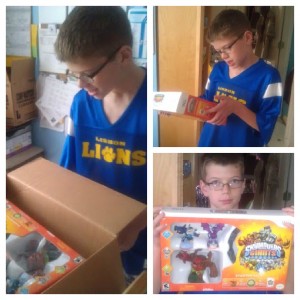 When my son was in kindergarten, he told me MANY times that a kid in his class played a super violent role-playing game. I’d say “What?” And then say “Well, I’m sure X doesn’t play the game, but maybe his dad or older siblings play.” My son was satisfied with my answer even if it wasn’t what he wanted to hear. He’d never seen much less played any violent role-playing games and I wasn’t about to start letting him.

Fast forward to today where from time to time he talks about kids who play these violent role-playing games. At this point, I am sure that these kids do actually play these games, but I’m not about to let my son play them. He’s far too young and impressionable. Those games are rated adult or teen for a reason.

I am SO glad that there are SO many good role-playing games for kids to play. One game that is a favorite in our home is Skylanders. I spotted Skylanders at Toy Fair, then at another toy showcase, and then again at Toy Fair. I love that my job as a blogger gives me the opportunity to see about a new product and almost immediately share that new product with Musings from Me readers and followers. I’m proud to say that I was a VERY early adopter of Skylanders.

If you don’t know about Skylanders or Skylanders Giants, here’s the scoop. Skylanders was the first kids’ product to combine a physical toy with a digital toy experience. My son revs up the Wii, places his Skylanders figure of choice on the Portal, and he is off to the world of Skylanders. These folks live on a cloud and have adventures. The Portal is an integral accessory to the Skylanders game and is sold with the Skylanders Giants Starter Pack.

The cool part of the game is that my son can play Skylanders or the new game, Skylanders Giants by himself or with friends. Last week, he invited a friend over to play who walked in and immediately unzipped his backpack releasing a cascade of Skylanders figures on to the family room floor. My son and his friend were in heaven that they were able to play the same game together. Another plus is that if your kid has the Wii version, but the friend has Skylanders Giants on another platform, the kids can still play together. 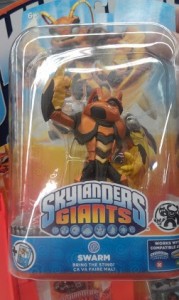 Skylanders Giants introduces 16 NEW characters to the world of Skylanders. My son wanted to know more about the Giants…there are 8 Giant Skylanders. These guys are huge but fit nicely on the Portal of Power. The 8 new Skylanders have never-before-seen powers.

With the release of Skylanders Giants come the new LightCore figures that glow when near or on the Portal of Power…no batteries required. Fan favorites from Skylanders Spyro’s Adventures return as Series 2 characters. These Series 2 figures have the all-new Wow Pow upgrade power and can choose more than one upgrade path.

What I like is that ALL the figures from Skylanders Spyro’s Advenures are compatible with the new Skylanders Giants game. So your kid like mine can keep collecting and playing with his figures since all old figures still work. My son doesn’t play on the floor with his figures, but for a kid who does role playing off the TV screen being having all characters available for play even if old is a huge bonus.

A round up of posts and links showing why the Musings from Me family loves Skylanders…and Skylanders Giants too!

I was sent the Skylanders Giants Portal Owners Pack for review. The amazon links are to my amazon affiliate account. The views expressed in this post are my own. I follow the tenets of Blog With Integrity.