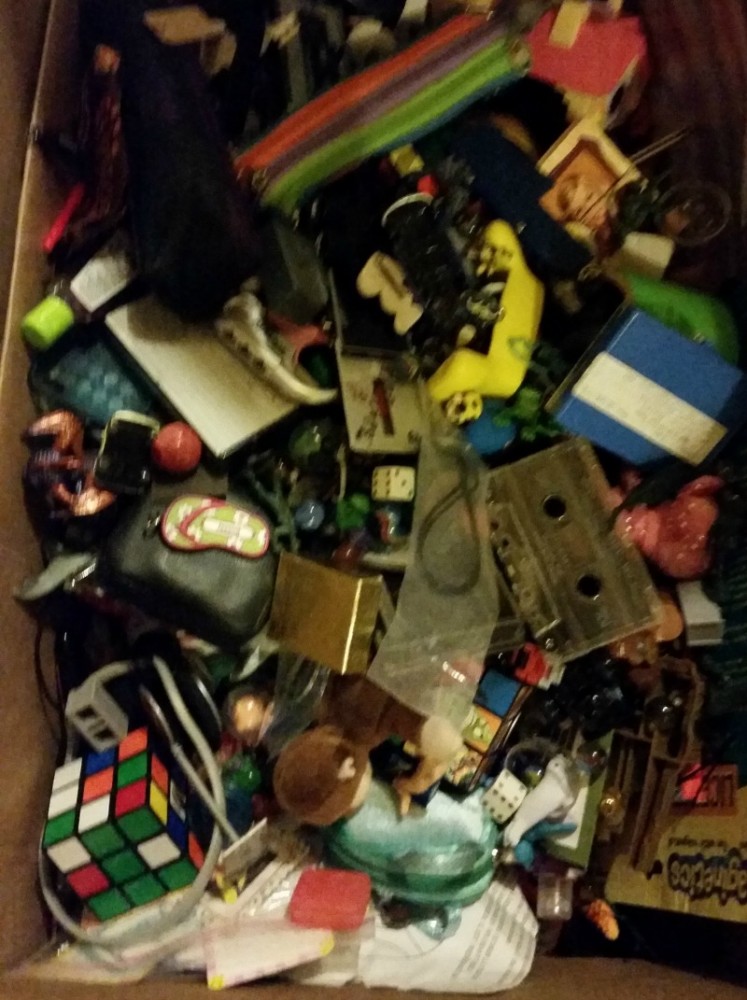 I’m not what you would call a super-duper housewife. I clean when I have to do. I declutter when the mood strikes. The problem is that I never know when a cleaning mood will strike.

This weekend was one of those times. I saw an opportunity to not only declutter but do it with other people. The other people were my kids and husband. The husband was easy to get on board. He has wanted to declutter the playroom for a while. The kids were a harder sell but we left them no choice. Head down to the basement…or else.”Or else” is a good motivator…it turns out!

Here’s how we decluttered part of the playroom:

– The Teen found all the track and pieces to the Geo Trax set.

– The Tween searched high and low for all the Star Wars guys (are there any Star Wars gals except Princess Leia and Padme?!).

– The Kid found all the large trucks and front end loaders and helicopters.

– The Husband found all the dressup clothes.

– And me? I found all the Hot Wheels racetrack pieces. Oh and I sorted through the cars bin to sift through Stars Wars figures, Silly Bandz, fake jewelry, and anything else that was mixed in with the cars.

With the Geo Trax track, buildings, and railway and road vehicles nicely stacked in a box, I released the Teen. She was grateful to escape the basement to clean her room. Now that’s some decluttering dedication. In the face of having to clean no matter what she chose her bedroom!

The Tween, the Kid, the Husband, and I delved further in to the basement.

The process for moving furniture to the playroom has been a long time in coming. We’re finally ready to get new furniture for the family room. The kids will gain a more comfortable seating area for watching movies and playing games. Our current chairs consist of the old glider from the days of babies…a fuzzy purple chair…a low-to-the ground deck chair from Justice…2 low on beans bean bag chairs…and a teeny chair that was designed for a very small child. So new seating is a welcome addition to the playroom.

In order to get the new seating in to the room, decluttering is a must. I titled this post…Back-to-School Edition as I want to get the kids in to the mindset of keeping tidy rooms in whatever room they are in. I think the final straw was finding an oven glove on  the coffee table in the family room. Why? No one seemed to know why it was there or admit to moving it. Sigh.

What are you doing to get ready for the new school year?

← I’m All About Kids and Reading
Where Were You? #earthquake →